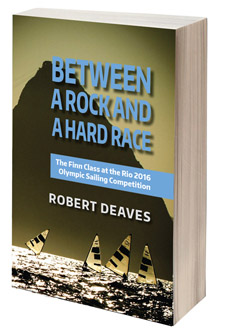 Between a Rock and a Hard Race takes the reader on a four-year journey through the eyes of the Finn class athletes who took part in the Rio 2016 Olympic Games. It begins on a hill in Weymouth and follows the highs and lows of most of the sailors as they journey towards Rio. It provides some fascinating analysis of managing an Olympic campaign, with extensive input from many sailors, all three medalists as well as the coach of the eventual gold medalist, Matt Howard. Much of the content is adapted from the hundreds of Finn Class press releases and interviews that were released from 2012 to 2016, but these have been woven into a tight narrative with exclusive content and insight. At 269 pages and 105,000 words, it is probably the most in-depth book ever released about Olympic sailing, and the challenges the athletes faced to stand on the top of the podium.