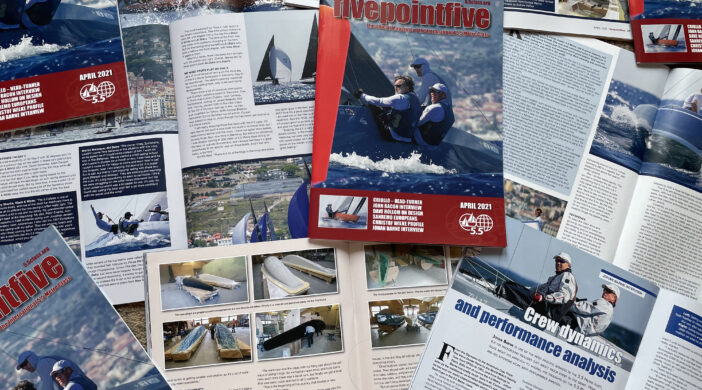 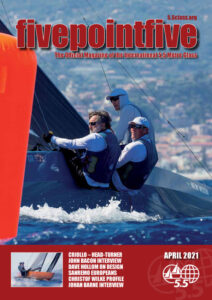 The April 2021 issue of fivepointfive, the International 5.5 Metre class magazine has been published.It comes at a time of limited 5.5 Metre racing because of COVID-19, but at time of great optimism and growth within the class with new boats being built and even some new designs hitting the water this year. This issue includes features on the new boats as well, interviews with John Bacon, Jaouen Gurvan, Christof Wilke and Johan Barne, reports from the major events in 2020, and class updates from around the world.

Here is a brief preview of some of the content.

With two newbuilds under way in Cowes, on the Isle of Wight, Dave Hollom explains the design process and how it all came about.

He writes, “In 2019, time for the 2020 Worlds I produced a prospectus for a proposed new 5.5 Metre. It contained a number of new avenues of possible progress in the design of 5.5 Metre boats and it was hoped that the Australian, David Hayter, who very successfully sails one of my International Fourteen dinghies, would perhaps be able to contact prospective owners during those Worlds in Australia. As it turned out Peter Morton otherwise known as Morty, a British owner new to the class and who was keen to have his own 5.5, decided to take matters further.”

The boats are expected to be ready to launch by late May 2021.

After several years campaigning MC38s, Melges 24 and others, John Bacon finally got into a 5.5 Metre in 2018 and took back to back victories in the Evolution category at the World Championship in 2019 and 2020.

He says, “I’m loving the whole idea of a development class inside a measurement rule. I love the different boats. I love the history. In One Design it’s all about the people. In the 5.5 class it’s very much about the boats.

“The class is a combination of protecting the older boats and keeping them relevant combined with the cutting edge of a development class. That’s the way it’s always been. For sure development will hit a wall for a while and then someone will get going pushing the limits again. Just looking at what Peter Morton is doing now, that’s super great for the class to get new designers involved to see where we can take this.”

There is also an extended interview with Christof Wilke. Over the last 30 years the Wilke yard, by the shores of Lake Thun in Switzerland, has undoubtedly produced the most successful 5.5 Metres in the world. They show no sign of slowing up with a new design hitting the water in 2020.

“I had possibility to sail one for the first time in Cannes at the Europeans in 1993 and it was my first contact with the class. It was so sexy, and I was keen to build one. We found someone from the lake here who was ready to build with me and we started a project for two boats.

“The new shape is very similar to the previous shape except it has straighter and smoother lines. However, “we wanted to increase the dynamical length of the boat. When the boat is heeling the waterline will be longer. That was the main goal.

“Under the water the shape is very similar but the chine is slightly sharper as the waterline is narrower. The actual volume is the same. The new boats also have very small inverse sheer. “The idea of the positive bend, and there are a lot of boats with positive bend and it’s a modern style, was to lift the middle part to have the mast slightly higher on the waterline.”

Johan Barne is one of the most prolific winners in the 5.5 Metre fleet, but his background includes just about major event in the sport. He talks about his approach to sailing, his extensive work with performance analysis and of course, his thoughts on the 5.5 Metre class

“Even though it was very nice to win the Worlds in Nynäshamn with only straight bullets, I think my first event was really special. I joined Kristian [Nergaard] for the 2008 Gold Cup in The Bahamas. The setting outside Nassau was just great and I really enjoyed sailing with Kristian and being able to apply Soling skills in a different class.

“I especially like the dynamics with a three-person boat. It both enables and encourages teamwork and as well allowing you to take on big roles and responsibilities. Another thing is that people tend to sail the boat for many years so the friends you make will hang around for a long time. Last thing to mention is that the class goes to nice places for major regattas. It’s is a big bonus not looking too much where the local fleets are but rather concentrating on delivering a great experience for the participating crews.”

Gurvan Jaouen owns and races two 5.5 Metres, an Evolution and a Classic, and tells the story of how they came to end up in Brittany and race all over Europe. He races Korrigan, FRA 19, a classic design by Copponex, launched in 1961, and Auguste 1er, FRA 47, the last French Evolution design by Berret-Racoupeau from 1992.

“Sooner or later, perhaps there will be also a modern. The kind of boat the 5.5 is makes its development attractive, and the class has grown along with it. The boat is good seaworthy boat, easy to handle and easy to transport. The 5.5 is definitely a good size for a young naval officer leaving often at short notice.

“They’re easy to handle in regattas, just needing a crew of three, sporty enough for the young sailors we were ten years ago, easy to crane and transport once we had the right trailers and cars (I went to Norway in 2009 trailing Korrigan behind an inappropriate car – before moving to the bigger one). They are also very easy to sail singlehanded.

“Its efficiency upwind is quite incredible, even racing against more modern and bigger yachts. Her downwind ability is in classical mode, but efficient too: it’s funny to sail deep downwind in a straight line towards downwind mark in some Caribbean race, while some light surfing yachts sailed the width of the race course, going quick on the water but no-faster to the mark.

“The 5.5 Metre is a kind of head-turning yacht, indeed with beautiful lines, either classic, evolution or modern.”